Laundry   How things could have gone

I was up a bit early and so I decided to watch cartoons. The cartoon which came up was some version of Superman, where Superman was voiced by Patrick Warburton. He was building a flying cage platform to capture the active-resistance hippie robot drones (with laser beams) which were about to wreak havoc on Republican City, with the assistance of about 12 army men who he had flown up to the flying platform personally. In some brilliant move, Superman decided that sitting inside the cage trap was the best place for him and the army men when the robot drones arrived, and started shooting at everything.

“Oh no, now I’m going to be depressed,” said Superman. “I should fax in a prescription with my SUPER FAX POWERS.” He closed his eyes and put his fingers to his temples, and Aquaman-style ‘thought waves’ came out. Then the robot drones were in the cage and powering up to shoot everything, and he flew out the escape hatch above.

When he landed on the shore just outside the city, Jimmy Olsen was standing there, holding a fax, laughing like a hyena.

“Did you send this fax in?!” said Jimmy, in one of the Venture Bros.‘ voices.

Jimmy held up the fax, which looked like it was drawn in crayon. 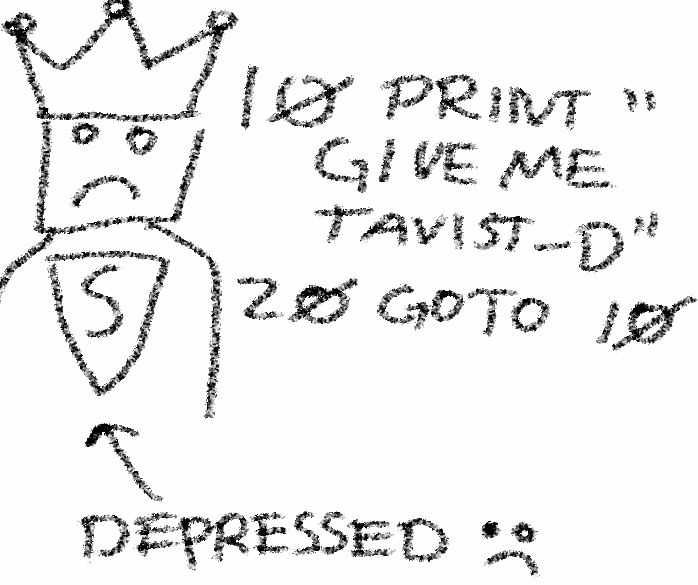 “Ha ha ha! Don’t you realize Tavist-D is an allergy medication, and not for depression?!” guffawed Jimmy.

“I know I have a problem, Jimmy,” said Superman.

“SHUT UP!” said Superman, punching Jimmy in the face.

I turned off the TV, realizing I needed to get groceries. I went to the grocery store downstairs and there were flashing police lights inside, but for some reason I went anyway.

A short homeless man pushed me out of the store and asked me for money.

“How do you pay for groceries, essé?”

“I pay for everything with credit cards!”

“Well then how do you pay for your credit cards? You must have cash at home!”

“Oh! How much do you have in your bank account? Ten grand?”

“No! Just leave me alone! Here, you need money to buy you groceries? I’ll buy you like fifty dollars worth of groceries, how’s that?”

“I’ll double it!” said the woman inside the grocery store who he’d been presumably attempting to mug before I arrived.

So we both went in and took him around the store, slowly filling up a cart with items that he really did need (and not Cocoa Puffs and whiskey).

Then the woman had to go to the bathroom, so she went into it, and the homeless man tried to follow her.

So the homeless man turned into Hobbes the tiger, and pounced into the bathroom.

I looked around nervously to find some help. The only other person in the store was another woman, who smirked and assumed that the lady in the bathroom was just being gone down on by her boyfriend or something.

“Please, get some help, she’s in trouble!” I said.

She just kept walking away.

“Please, I’m running late for work! I’m working on a really cool computer vision system for robotics and it’s really neat and the robots will learn how to read and do everything a human can do okay I guess you’re not listening.”

Then I got abducted by aliens, who all had the voice of Roger from American Dad.

I had played this game before, so I loaded my save file from towards the end, so I wouldn’t be late for work. It was the scene where I’d escaped from everyone’s clutches and was trying to escape the spaceship before it exploded. There was a countdown timer in the corner of the screen, and there were only 30 seconds left.

“WELL if I can’t get away from you I’ll just have to leave enough evidence!” I said, wrestling Roger to the table. I used a dentist’s scraper to start writing the name of the homeless man, “Steve Harvey Oswald” into Roger’s chest.

“Well this will be enough for Oliver Stone!” I said, getting to the D.

Then a big “NOW LOADING…” window popped up in the middle of the screen.

“Oh, poop, this means a cinematic’s about to play, huh?”

Down on Earth, Oliver Stone was analyzing the evidence frame-by-frame. “Steve Harvey Oswal? What is that? A name? What kind of last name is 'Oswal?’ I can’t work with this! This case is unsolvable.”