So what is Subl, anyway?   Medical terminology for trans healthcare

So because I’m starting the new job next week I figured it was time to get myself back on a compatible sleep schedule. In the past I’ve always done this by taking a dose of melatonin before bed to ease myself into going to bed early, and then try to continue to go to bed at a regular time every night. That usually works for about three days.

What I’m doing this time is attacking it from the other end: I have set my smart bed and Apple Watch to both wake me up at 8:00 every morning, both only on weekdays. The smart bed’s alarm comes through my phone (which charges on my nightstand) and happens during a shallow sleep phase during the half hour or so before the actual alarm time. This usually wakes me up effectively.

The Apple Watch charger, however, lives on the bookshelf across the room, and the Nightstand Mode alarm turns out to be the right combination of pleasant enough to not be jarring and annoying enough to get me up to turn it off.

So, this week my sleep schedule has looked like this: 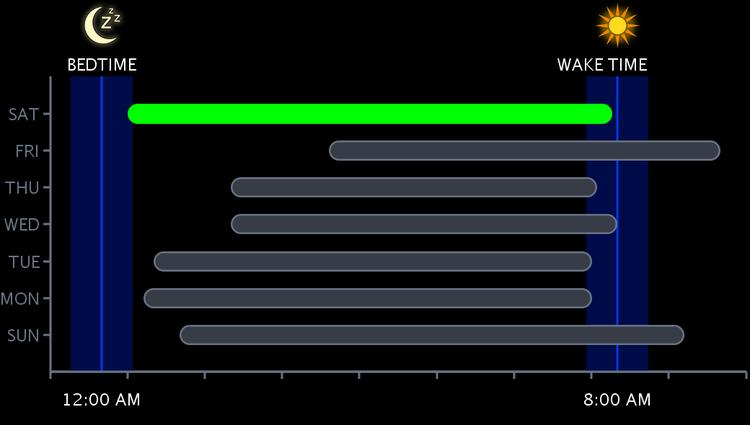 Basically I’m taking an approach of: rather than being nice to myself, force myself to get tired through sleep deprivation so that I end up having to go to bed at a reasonable time. And that’s been working. On that chart, last Sunday night was the last time I was “nice” to myself; starting Monday night I was being strict about the alarm, and during the week I got progressively more tired. Thursday night I actually felt like I needed to go to bed at 11:30!

Unfortunately, I was out at karaoke, and for various reasons couldn’t go home early (mostly I had brought an HDMI extension cable as a test for a thing and I needed the cable back for my studio setup) so I had some caffeine so I could last the whole night. Which is why on Friday morning I felt garbagey enough that I went back to bed after clearing the Apple Watch alarm and took a post-wakeup nap, which the bed still counted as part of the same sleep period:

So the interesting thing is that last night I actually felt like going to bed at midnight, and I woke up today (Saturday) at 8:00 – even though my alarm is only set to go on weekdays.

I’m basically using past fluffy’s indiscretions to punish future fluffy into hopefully not make the same mistakes. So far, it seems to actually be working.